As the United States transitioned to a new century filled with challenges and possibilities, it experienced renewed ideological and cultural debates, sought to redefine its foreign policy, and adapted to economic globalization and revolutionary changes in science and technology. The 68 images in this final group document the new conservatism that swept over the U.S., impacting culture and politics, and government. The end of the Cold War and new challenges to U.S. leadership are also documented as well as the challenges facing the contemporary U.S. that stem from social, economic, and demographic changes.

— A newly ascendant conservative movement achieved several political and policy goals during the 1980s and continued to strongly influence public discourse in the following decades.

— The end of the Cold War and new challenges to U.S. leadership forced the nation to redefine its foreign policy and role in the world. 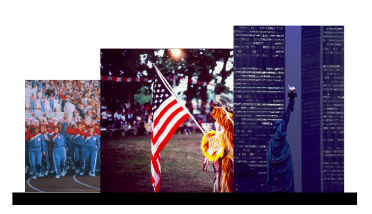 The work of Jean-Michel Basquiat