After World War II, the United States grappled with prosperity and unfamiliar international responsibilities while struggling to live up to its ideals. The 70 images include primary source documentation of that struggle within postwar America and abroad. The political and social responses to liberalism and an anti-communist foreign policy are documented in this image group, as are the postwar economic,  demographic, and technological changes that had a far-reaching impact on American society, politics, and the environment.

— The United States responded to an uncertain and unstable postwar world by asserting and working to maintain a position of global leadership, with far-reaching domestic and international consequences.

— New movements for civil rights and liberal efforts to expand the role of government generated a range of political and cultural responses. 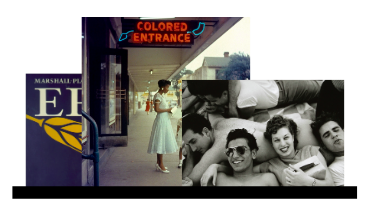 Jacob Lawrence and the Harlem Renaissance

Marilyn Diptych and Other Works by Andy Warhol