The new republic struggled to define and extend democratic ideals in the face of rapid economic, territorial, and demographic changes. The 40 images in this group include documentation in the form of political cartoons, illustrations and photographs describing the conflicts and material culture of the United States as the world’s first modern mass democracy. Primary source documentation of the rapid technological innovations that changed both agriculture and commerce and precipitated profound changes in U.S. settlement patterns, regional identities, gender and family relations, and political power are included. Documentation of the bounty of the natural resources of North America and the impetus to fully engage in foreign and domestic trade, expand its national borders, and isolate itself from European conflicts are also shared in this group.

— The United States began to develop a modern democracy and celebrated a new national culture, while Americans sought to define the nation’s democratic ideals and change their society and institutions to match them.

— Innovations in technology, agriculture, and commerce powerfully accelerated the American economy, precipitating profound changes to U.S. society and to national and regional identities.

— The U.S. interest in increasing foreign trade and expanding its national borders shaped the nation’s foreign policy and spurred government and private initiatives. 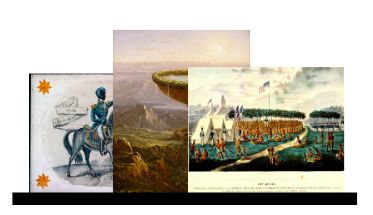 Thomas Cole, The Oxbow and other Paintings

Art and Architecture of the Americas 18th and 19th Centuries