As the nation expanded westward, and its population grew, regional tensions, especially over slavery, led to a civil war — the course and aftermath of which transformed American society. The 52 images in this group include those that document the expansionist foreign policy and increased migration to the United States from other countries and the deepening regional divisions, debates over slavery and other economic, cultural, and political issues that led to the conflict. Cartoons, photographs and other documentation of the Civil War and the contested Reconstruction of the South are also included in this group.

— The United States became more connected with the world, pursued an expansionist foreign policy in the Western Hemisphere, and emerged as the destination for many migrants from other countries.

— Intensified by expansion and deepening regional divisions, debates over slavery and other economic, cultural, and political issues led the nation into civil war.

— The Union victory in the Civil War and the contested reconstruction of the South settled the issues of slavery and secession, but left unresolved many questions about the power of the federal government and citizenship rights. 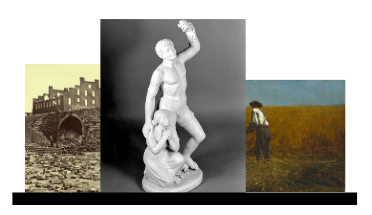 Art and Architecture of the Americas 18th and 19th Centuries