An increasingly pluralistic United States faced profound domestic and global challenges, debated the proper degree of government activism, and sought to define its international role. The 114 images in this group shed light on the people, places and ideas related to the period’s social changes including urbanization and mass migration under the pressure of world wars, and economic distress. Political cartoons and other documents that present varied points of view in the debates over the nation’s values and its role in the world as the increasingly dominant international military, political, cultural force are included in this group.

— Innovations in communications and technology contributed to the growth of mass culture, while significant changes occurred in internal and international migration patterns.

— Participation in a series of global conflicts propelled the United States into a position of international power while renewing domestic debates over the nation’s proper role in the world. 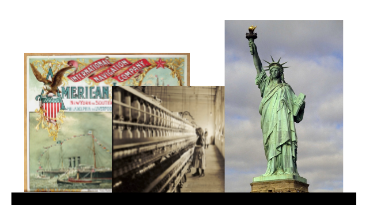 Steerage & other works of photography by Alfred Stieglitz