British imperial attempts to reassert control over its colonies and the colonial reaction to these attempts produced a new American republic, along with struggles over the new nation’s social, political, and economic identity. The 41 images in this group include key primary source documents, cartoons and illustrations related to the battle of the French and British empires for North American supremacy, and the ensuing conflict among the British government, the North American colonists, and American Indians. Also included are documents, illustrations and paintings related to the creation of a new nation, emerging democratic ideas and republican forms of government, as well as other new religious, economic, and cultural ideas. This group includes illustrations of the landscape of North America and portraits of key figures in the new Nation’s development.

— British attempts to assert tighter control over its North American colonies and the colonial resolve to pursue self-government led to a colonial independence movement and the Revolutionary War. 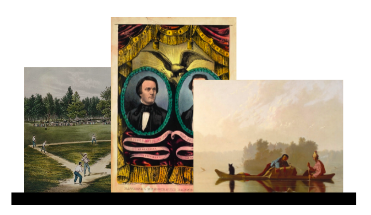 The Americans in the 18th and 19th Century